I have been noticing alot of moisture on the windows on the whole front side of my home. The back windows don't seem to get as much or any moisture. I just happened to pull the blinds up today and noticed that there was mold all along the bottom of the windows now because of it. How can I get rid of this moisture? Should I get a dehumidifier or is it possibly the windows themselves? Everything seems to be sealed up pretty good all around them so I'm not sure what I should do. Any help would be greatly appreciated.

But seriously, I am finding out that humidity might be a serious thing in MHs, mine anyway. I now understand where there's that little air exchanger thing and a humidistat, it actually does work somewhat. I posted earlier about finding condensation on a wall where a large bed was pushed up against it; pulling it out from that wall and putting in some blocks of wood between the frame and the wall solved the problem, now that there is airflow there (the wall was acting as a vapour barrier, the bed insulation). We get steamy windows here and there as well, and sweaty pipes.

The air exchanger our place came with, it does clear the windows and humidity in that end (where the kitchen is) somewhat.

It seems this place just doesn't breathe very well. Maybe that's common to all MHs? Maybe it has to do with all the vinyl coated wall panels and stuff, low ceilings and stuff like that compared to a larger house? Our last house was a 100+ year old place, ventilation and "breathing" were not an issue, drafts were of course. However here, I'm considering next year installing a larger, ducted air exchange system or something. Anyone else tackle this problem successfully in a MH?
Top

The moisture is on the room side of the windows, now if I didn't want to have to run a dehumidifier all the time because of the electricity bill would getting new windows fix the problem?

Of course I don't really have the money for new windows either so running a dehumidifier may be the way I go. If I did go that route would I just put the dehumidifier in a central location or would I need one for each of the rooms?

Thanks for the help as always

Moisture between windows is a sign of window leakage, very common in crank out windows. The only way to stop it is to replace the window with a quality window.

If you have exhaust fans in the bathroom and kitchen, use them when showering/cooking to help draw out excess humidity.
Top

Check the place over for a small leak somewhere. Maybe it's not showing up as a wet spot on the floor but could be dripping down underneath causing excess moisture in the living space. Look for wet spots on the belly wrap. Some of the newer homes have a belly wrap that will hold water. Look for areas that are tight, heavy and sagging if you have a newer home.
Top

Is the front of the house facing North?
Where are you located?
What kind of furnace do you run?

I purchased a digital hygrometer to help determine the operation of our HV/AC system. It also proved valuable when I decided to vent our electric dryer to the indoors during the winter to offset the drying effect of our electric furnace. Upon doing so I noticed that at the comfortable winter indoor humidity level of 35-45%, excessive window condensation w/mildew became an issue. I've since settled on 20-25% humidity, which doesn't eliminate the window condensation (and I really can't in the winter), but it makes for a happy medium. 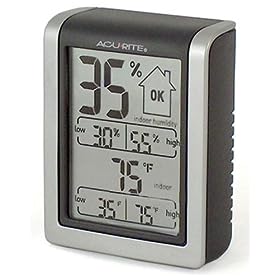