by mrbb
OK I have been debating on what to do with my roof
I contacted a bunch of roofers in the area, and , its been a struggle to get any one to even come look at a mobile home here?

BUT I did find two roofers (called 5 different one's and only TWO showed up)
that want to go, a rubber roof over the old roof
but the all say they have to cut off the originals roofs gutters and don't have anything to replace them with
so NOT very happy with that idea
and after talking to two folks in my area that did rubber roofs over, they all have leaks now??

SO< I am a little hesitant on going rubber roof now??

NEXT, I found a contractor that wants to do a roof over mine

NOW< my trailer has 3 added on enclosed porches, on on each end in the back side and one in the middle of the front side?

I am NOW scared about doing this,as this mobile home is OLD<> and I Doubt the walls could hold all the weight of this whole roof

he plans to do 3 ft centers on things to save weight, but that also then sounds like a lot of weight spread out between the 3 ft on centers,
I mean most build here on 16-18 inches, never mind 3 ft?


SO< does anyone have any insight to IF a almost 60 yr old mobile home , if its Walls.sides can hold up that much weight
I some times get up to 2 ft of snow at a time as well, which will have to be factored into things, on weights??

SO< any help would be great, as I wanted to have this done before fall
Took roofers 6+ weeks to get back to me, so they are NOT helping with things in a timely fashion??

I just don't know what to do the rubber 60 mill roof coating, then NO gutters??
or this roof over deal, and worry about roof caving in??
PLUS I am also a little worried about the metal roof over, being VERY loud in heavy rains or sleet ??
as roof now is loud inside? (low insulation in this place)

any help would be highly appreciated

by Greg
Rather than a rubber roof, price a free standing pole barn roof. It my cost less and be stronger.

by mrbb
the roof this guy want to put over mine is a metal like pole barn roof, BUT he wants the walls of the trailer to be what holds it all up, roof will be from center of mobile home, on front side
will be 16 ft wide for 20 ft and then just 8 ft wide the rest of front side , and then back side will be 20 ft out from center, BUT he plans to install two posts at 20 ft from both ends, and then 12 ft out from walls, a second one to support the wider side of things??
this still sounds like a LOT of load on the walls of the mobile home?

HOW would they build a free standing pole barn roof over it, would it be like this??
or differently
as I am not sure I understand

MY logic is they should build supporting pillers every 8-12 ft across the entire front and back to support the roof over and NOT be using the walls of the mobile home at all to hold things up??
am I wrong for thinking this way??

by Greg
you sink 6x6 posts in the ground next to the home and build off from them. It could look like your home is parked under a big picnic pavilion or with some design work you could make it look however you want it.

by mrbb
thanks, that's what I was thinking
I thought about doing that a while ago, but then I wanted it to look more nice to the eye, and wasn't sure how to get the windows to work right if I added some sort of siding to it

I talked to the one roofer that wants to to the roof over and use my walls to hold up the buiold over
and said, I WON"T do it that way
he said, I am NUTS for not thinking the walls will hold it all up
I then said, well if it caves in, you paying for it?? to fix it>
and he said a NO

I said then how about giving me a price on adding support like you said
he said I can do that
BUT his plans are to just place a pad under then and NOT sink them in the ground??

which , again I think isn't right, as what's to keep them from kicking out or ??


seems like they all want to take short cuts, on every thing but price LOL

TRYING to get him to re think his idea here

HOW many wall beans/supports do you think should be used , its a 12 ft wide x 60FT long?

is that too many, or too little??
and thanks for the help here, new to this stuff on mobile homes

by Greg
Depending on your location, snow load may be a factor I would think 10' would be fine but I'm not an engineer either. Your codes officer may have a better idea for you or require a stamped print before issuing a permit.

by mrbb
yeah I get a good snow load here at times, over 2 ft isn't out of the norm in a good winter!

haven't even thought about the permits and code inspection, HOPING the roofer would handle that stuff to be honest, as I know some do
have to ask about that too

he is supposed to be giving me a new price with some supports
as his 20 ft spans sound WAY out there to me??
10 ft sound fars enough IMO, but I ain't no engineer either so??

by 1987Commodore
No way do you want those support posts sitting on a pad. However you do it, the foundation needs to be below the frost line, usually about 36". I would use Sonotubes and extend the concrete 6" above ground, anchor 6x6 to them.
I would be absolutely amazed if your walls would hold the load, and then you would probably have to reinforce the current support pillars underneath the home, too.

by mrbb
thanks, for the reply's again

The mobile home here has been here for 50 yrs now, its NOT on a full cement slab either, just a small section for each support?
the builder that wanted to do the roof over, wasn't even planning on doing any pads, just planned to use some of them pre made square blocks to then place a 6x6 post on
I will for sure make sure they are in the ground if he does things

and yes, 1987Comm0dore, that is a LOT like what he was going to build , just he wasn't planning to add that 3-4 ft wall on top before roof, he planned to use the roof wall, as the max height, But my roof is flat NO ridge on it

here is a link to my room from a while back when I did a coating and was starting thsi what to do idea?

been slow going
not planning to be cheap, want it done once and done right that is all

But I think I will get the builder in my place and show him that tread on that roof and tell him THAT is what I want it done like and see what he says?
Thanks a bunch guy, appreciate all the help and advice and info

then do the entire roof build a roof over the entire home 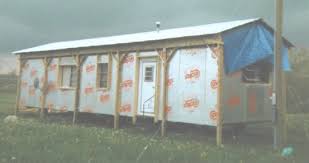 by mrbb
thanks, thats what I want, but again I have a porch on the front side(9x17 ft), over the high side towards the middle on front
and then two on the back side, one on each end
one being a 12x14 and the other like a 8x12
so they stick out father from mobile home each in the back

then there is very littl;e slope to them due to how close to flat they are with NO lower to make them, and still be able to open doors
so, a metal roof will HAVE to be built up higher to all pitch of it to then cover these porches and mobile home

not that I see it being that big a deal
just need a darn roofer that wants to to it RIGHT
I called a different guy yesterday, as other two don't seem to be returning calls, took 6+ weeks to geta first price off them, and design deal??
seems there SLOW workers?
But called an Amish guy , and he seems to WANT a job and to make some $$
so hoping he works out better than the rest of them so far, he builds pole barns for a living!
so he should be up to the task and know how and what if, any permits I need
so he said he would have some info maybe Monday IF he could get here by then???
he is 80 miles from the place, so, ??
will see
will update as I get things going too
maybe will help someone down the road?

by 1987Commodore
In the link I posted, you notice that the new roof is done properly, supported by the 6X6s, not resting on the trailer itself. Since you have a flat roof, you wouldn't have to build it so high, but you can adjust the height to provide needed slope over your additions.

by mrbb
thanks again, went to a local county fair today and they had two local pole barn builders on site, had a good talk with them, and having them come out and give me an estimate on doing a roof over , both said its NOT what they normally do, but cannot see why they couldn;t do it all!

SO, between them and that AMish guy, I am HOPING someone steps up and gives me a decent price on a GOOD roof over it all, and ends my quest for a roof LOL

by 1987Commodore
Can't see why the pole barn guys or the Amish couldn't do the job; after all, it's just like building a small pole barn.
All times are UTC-05:00
Page 1 of 2
Powered by phpBB® Forum Software © phpBB Limited
https://www.phpbb.com/