First, let me say that I've really been enjoying your posts. It's funny because you're basically doing the same remodel as we are! Drywall, texture, front door, etc...so it's fun reading/seeing what someone else is doing.

Anyhow, so the ceiling pipe. We removed a fireplace from our place that had a huge metal chimney venting out the roof. I thought about somehow capping it at the roof but leaving it, and then just cutting it above the ceiling line. At the end of the day I didn't want to risk any future trouble. So I completely removed the pipe, then cut a nice square in the roof, added frame to hold new plywood, got everything buttoned up and then added roofing to the area. It took about four hours on the hot roof, but we haven't had any leaks and everything seems to be holding up.

Long story short, my vote is for a total removal and seal up. Have fun!!!
- Big Ed
Top

If you are putting down vinyl flooring the old floor must be perfectly smooth or every little dimple will telegraph through the new floor over time. In your case Luan should be screwed down and every seam and screw head be filled/smoothed with the cement compound recommended for that purpose.
An individual must enforce his own meaning in life and rise above the perceived conformity of the masses. (Anton LaVey)
Top

Cutting out some of the subfloor: 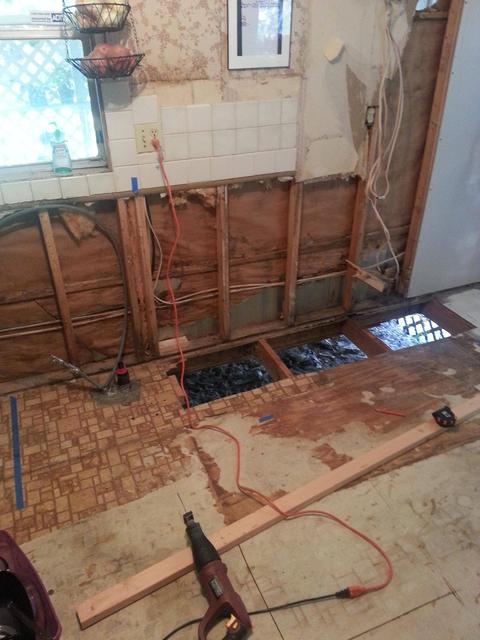 We were lucky enough to have an existing plywood subfloor, but there are still some damaged areas. I didn't get a final pic, but ended up removing a 8' x 2' section starting at the blue line on the left. After I dropped in the new plywood, I found that the existing subfloor that you can see on the right edge of this pic is warped pretty good between the floor joists. It dips down about 1/2" or so below the new plywood.

Looks like I'll be cutting out and replacing that section too. Ugh.
Top

Cabinet and pantry removal. The refrigerator is going to me moved to where the pantry used to be. The stove outlet in the middle of that wall is going to be extended and moved across the room. Not sure what to do with the vent for the old range hood yet, but I don't want to mess with anything on the roof. I think I'm going to cut it off as close to the ceiling as possible and cap it off, and cover the hole with new drywall unless you guys have a better idea that doesn't involve roofing. 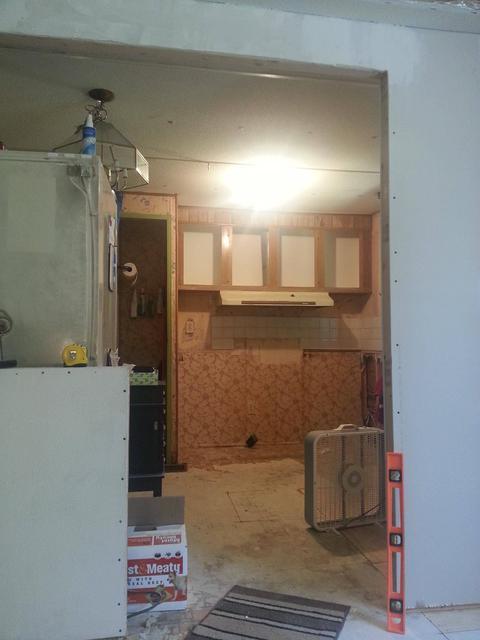 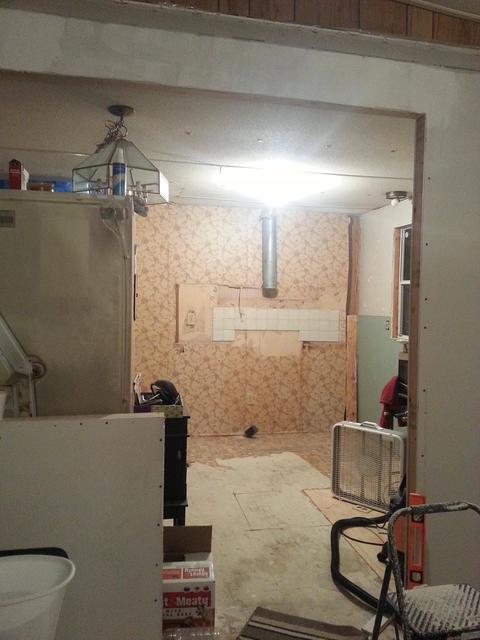 I think it's funny how they tiled around the stove console instead of straight across. Reminds me of people painting around a toilet tank (guilty!)
Top

My girlfriend's grandparents lived here before us. Same people that installed a ceiling fan by hanging it from a hook. I'm not sure if you can really tell from the pic, but the tile is pretty crooked and not grouted or anything. Still looks better than that wallpaper, though!
Top

I haven't posted any updates lately but I've been busy. At this point, all of the kitchen walls were gutted, reframed to be 16" OC and new drywall was put up. When we started this project months ago, I bought some mold-resistant drywall that was going to go in the master bathroom but we ended up working in the living room and kitchen first. It's just been sitting in the gutted bedroom collecting dust, so I decided to put it up in the kitchen. 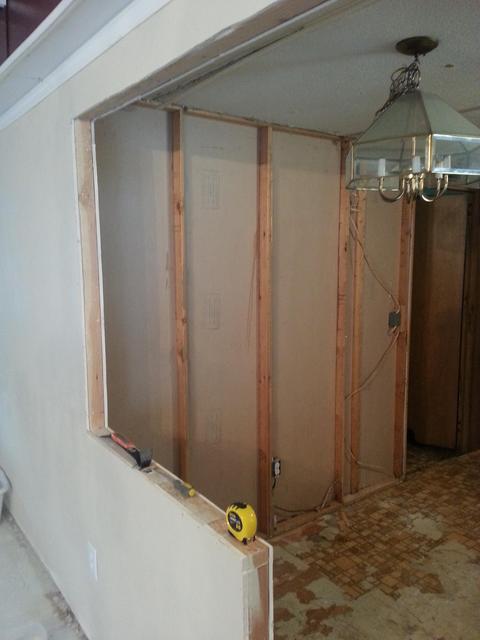 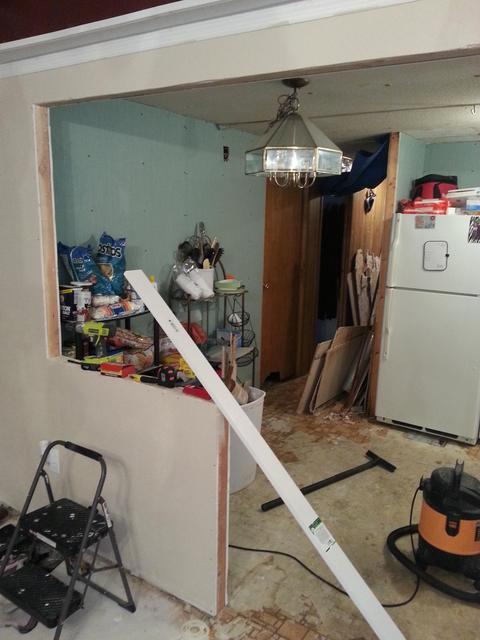 While the rest of the house has 2x3 framing, this particular wall is 2x4. It's located close to the center of the house, so maybe it's for support? But it was still framed 24" OC. Anyway, I added extra studs. I also cut about 3" off of the old range hood exhaust pipe that vents thru the roof. I'm pretty sure I'm going to remove it completely and patch the hole in the ceiling. 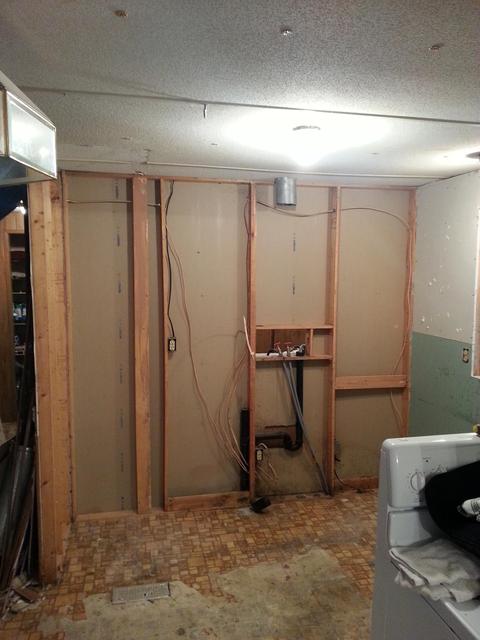 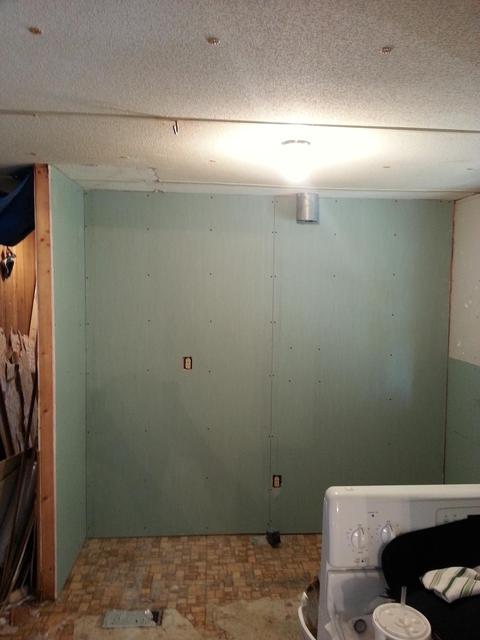 Putting some trim up between the dining area and kitchen. 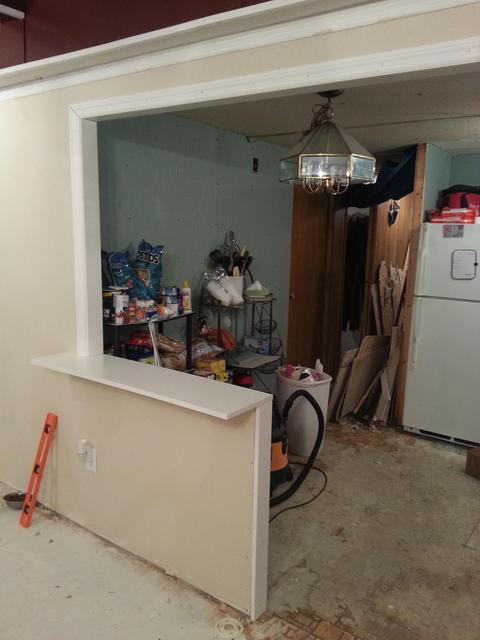 2 people sat here on Thanksgiving and ate and nothing fell apart. 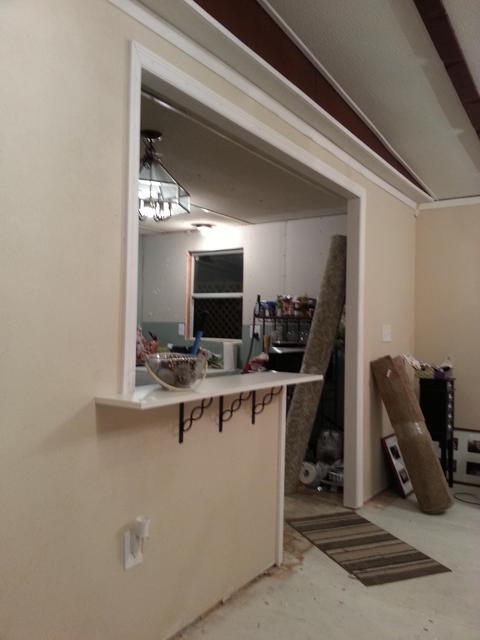 Here's a "before" pic of the original pass-through window: 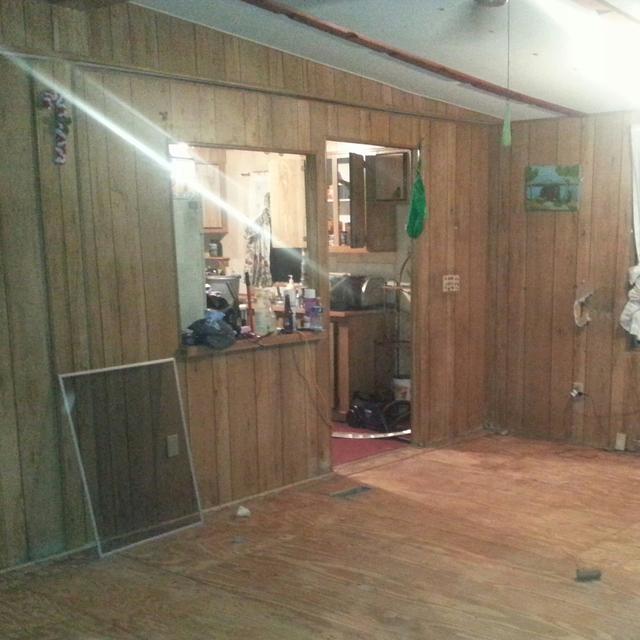 I was wondering what happened to this remodel. Looks like it's coming along. It's always harder when you have to work in a room being lived in like the kitchen with food and stuff in it. I really like how you did that opening and also the little shelf.
Top

Thanks! I raised the opening height and width, and made the 'window' part of the opening. Looks a lot better (besides just getting rid of the paneling)

We had to buy 2 cars in the past few months which really put a halt on buying materials for a while, but I think we're getting back on track now.

The next big thing is getting cabinets, counters and a sink .. I'm tired of washing dishes in the bathtub! I'm torn between Home Depot's off-the-shelf cabinets and cabinets from Ikea (there's a store about 45 mins from home).

As soon as the cabinets are up, I'm moving to the master bathroom. Gotta replace the subfloor, and figure out what I want to do for a shower. I decided not to do tile, and I'm looking for something besides the basic white shower pan and walls that isn't too expensive.
Top

We did HD cabinets this past summer. Just the cheap ones that we finished ourselves, we got them when they had a good sale on them. The quality is isn't the best, press board and the oak wasn't the best. But they were what we could afford and do at the time. So far they are holding up good but it's like they say, you get what you pay for. The way I looked at it was they are a million times better then what was in there. I added a dishwasher with the money we saved on cabinets.

Greg had mentioned some ready to assemble cabinets that he used and looked really good. I think he said the were cheaper then what he could have made them for and they were plywood carcasses and not the press board.
Top

ponch37300 wrote:We did HD cabinets this past summer. Just the cheap ones that we finished ourselves, we got them when they had a good sale on them.

Greg had mentioned some ready to assemble cabinets that he used and looked really good. I think he said the were cheaper then what he could have made them for and they were plywood carcasses and not the press board.

Ya, they cheaper than what I could have made, all wood, no mushboard. I found them at Grossman's bargain outlet. The brand name is Sunco, they may have a distributor in your area. Check their website.

Greg
"If I can't fix it, I can screw it up so bad no one else can either."
Top
Locked
26 posts