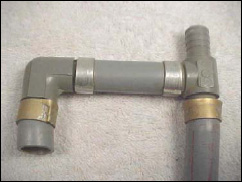 Plumbing in a manufactured home can be quite different than plumbing in a site-built home. In fact different enough that plumbers in many areas will not work on mobile homes. Why? Some plumbers don’t like to work on the new plastic waterlines. Others don’t like the fact that things such as tub faucets and drains aren’t standard. Another reason is just plain laziness — too much work to crawl under a home to get at a waterline. There is also, “You just never know what kind of plumbing mess I’ll find, so why mess with it at all?”

Today’s plumbing in manufactured homes can be described as ‘on the cutting-edge of technology.’ Because codes for site-built houses are strict and hard to change, mobile-home manufacturers are often the first to test new technology. Thanks to mobile home manufacturers, this country is now seeing a shift towards plastic waterlines — more specifically, a shift to cross-linked polyethylene (pex).

Working with plastic water lines is very simple, easy and fast. So why would plumbers scoff at that? One reason is that in many areas, codes for site-built homes have changed very little over the years. This has given many plumbers a good reason for not wanting to learn anything new. In fact, those same plumbers probably despise the new technology; therefore, they refuse to work on mobile homes.

If you are having trouble finding someone to work on your plumbing and you don’t want to attempt it yourself, try contacting a manufactured home repair company instead of a plumber.

Copper, on the other hand, is still occasionally used but has become quite expensive and much more time consuming to install. Although copper water lines will not corrode, cold weather can be deadly on them. If it freezes, copper either bursts or expands so no fittings will fit, making repairs about impossible. Plus, both products are difficult for the average homeowner to work with. This gave life to another alternative — plastic waterlines.

At first, the most popular plastic waterline was polybutylene, a flexible gray or black-colored plastic waterline. In the late eighty’s and mid nineteen ninety’s, many of the plastic fittings (right picture) that were used to connect polybutylene tubing were substandard; they would become brittle, crack and break. A class-action suit resulted and today polybutylene is no longer manufactured.

Anytime work is being done and plastic fittings are discovered, they should be removed. Brass or copper fittings are used today with the pex waterlines, polybutylene’s suitable replacement.

Between pex and CPVC (hard rigid plastic) waterlines, pex provides the most resistance against corrosion and has an ability to “remember” its shape. That feature helps prevent the pipe from bursting under extreme conditions such as freezing. CPVC, copper and pex are waterlines available on the market today, and pex is by far the more superior. Both pex and CPVC products withstand heat very well. One advantage of CPVC is that it can be glued (solvent welded) which requires no tools for assembly. But like copper, it cannot withstand freezing without damage. At the current time CPVC is probably the most widely available, but pex is rapidly making its way onto retailers shelves. When choosing your new waterline, consider using pex and investing in the crimping tools necessary to do the job.

If you want to know how to work with CPVC, copper or any other type of waterline, numerous books are available. The rest of this chapter will be devoted to working with pex.

No matter what type of waterlines (galvanized, copper, black, polybutylene, cpvc, pex) your mobile home currently has, you can easily repair leaks or do other plumbing projects by using materials available at your home improvement center or hardware store. For instance, several companies have available universal compression-type fittings and couplings designed to easily connect together about any type of waterline using only basic tools.

Most all homes have two sizes of waterlines — ½ inch and ¾ inch (inside diameter). ¾ inch waterlines are generally only used as the main waterline leading in and out of the water heater. ½ inch is generally used everywhere else in the home. One exception may be the risers leading to the toilets or sinks which sometimes are 3/8 or 1/4 inch. 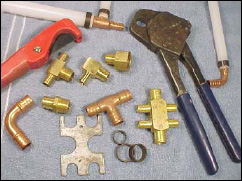 Today pex waterlines are pretty much the standard in the manufactured home industry. In many areas, pex is also the plumbers choice for new conventionally built houses. Probably the only turn-off with pex is that it is installed with crimp rings which require a special crimping tool. Not that long ago a crimping tool sold for over $150. Thanks to the popularity of pex, crimpers now sell for well under $100 and the costs will continue to fall. Investing in a pair of crimpers is a wise decision for anyone considering tackling their own plumbing. You could save 1 or 2 calls to a plumber and the tool would be paid for (and your neighbors would appreciate borrowing them!) You could delay the purchase of a crimper by skipping the rings and using compression fittings, the only other way to connect pex waterlines. But compression fittings aren’t as secure as crimped fittings and the damage you could get from a blown compression fitting would pay for a whole box of crimping tools. The above picture shows a pex crimper, pex cutter, go/no go gauge (page 14-4), crimp rings and a few of the available insert fittings.

As mentioned in the beginning of this chapter, pex is polybutylene’s replacement. Once only available in clear or white, pex can now be found in a variety of colors including red, blue, white and clear. Because so many manufactured homes still contain the gray polybutylene, repairs are still necessary. Since parts for polybutylene systems are no longer available, repairs have to be made using pex. The repairs are simple, you just have to remember that anytime you connect pex to polybutylene, you need a ‘pex to polybutylene’ adapter (pictured right) available anywhere pex fittings are sold. In the adapter kit, the gold ring is used on the gray polybutylene line and the black ring is used on the white pex line. Besides being a different diameter, the polybutylene side of the fitting contains a lot more rings than the pex side. Do not use a regular ‘pex to pex’ coupler as the inside diameter of polybutylene is larger.

If you have a leak in the middle of a gray polybutylene waterline, cut out the leak and install a piece of pex with a ‘pex to polybutylene’ adapter on each end. 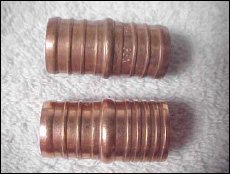 Figuring out how to do plumbing in your home using pex isn’t rocket science. Notice that everything is connected using fittings with rings. For instance, if you need to add a line to install an outdoor faucet (previous chapter), you simply cut in half an existing cold water line and slip in a tee. A tee is the fitting used when a waterline needs to branch off of another. Then slip a ring over the end of each water line that connects to the tee and crimp. Unlike trying to solder copper or glue CPVC, the beauty of using pex is that the pipes can be wet or still dripping and a successful crimp can still be easily made. How much easier can it get!

What Others Are Reading